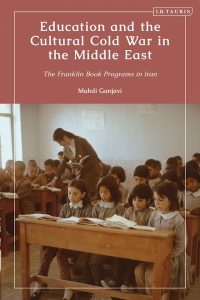 Earliest Persian translation of “One Thousand and One Nights”, translated by Muhammad Baqir Khurasani Buzanjirdi in 1814 (ed by M.Ganjavi, published in two volumes by Maniahonar, Tehran, 2022)

San’ati Zadeh Kermani published his masterpiece, Rostam in Twenty-Second Century, in 1934. This book is widely recognized as the first Persian science fiction novel. It was initially written for and published as a feuilleton to Shafaq Surkh, a newspaper daily under the editorial of Mayil Toysirkani (1847-1950). In this fiction, written a few years before the Second World War, the city of Zahidan in Twenty Second century becomes the site in which San’ati Zadeh Kermani imagines the utopian solution to his contemporary national and international challenges, such as the national quest for reform in judicial system, the national struggle between new and old values, and the Jewish question in the international scene (Ganjavi, p. 60-64).

Mahdi Ganjavi is a multilingual English-Persian educationalist, historian, and researcher with multiple degrees in education, history of Middle East, library science, international law, and law. He obtained his PhD from the Department of Leadership, Higher and adult Education, University of Toronto. His research focuses on the transnational history of education, literature, translation, law, print and publication in the Middle East, the cultural Cold War, and the archives in exile and diasporic archives. Dr. Ganjavi has submitted his book manuscript Education and the Cultural Cold War in the Middle East: The Franklin Book Programs in Iran (forthcoming with I.B. Tauris). Ganjavi’s scholarly writings, essays, and reviews have appeared in the International Journal of Lifelong Education, Encyclopedia Iranica, Iranian Studies, Ajam Media, the Bullet, Global Voices, and Review of the Middle East Studies.

Ganjavi’s translations of lickos, a syllabic poetry of South East Iran has appeared in Modern Poetry in Translation, and also in Asymptote. Ganjavi’s translation of high modernist, eco-poetry and New York School English poetry to Persian is published in several literary magazines such as Neveshta and Namomken. He has also contributed a translation to “Shades of Truth: Iranian Short Fiction of the Fifth Generation in Translation” (Mannani, M & E. Dehnavi Eds., 2019). In 2016–2018, Ganjavi edited and oversaw the publication of five little-known Persian novels from the 1930s and 1940s. These novels shed light on the origins of science fiction, detective fiction, and utopian fiction in Persian.

In 2014, Ganjavi co-edited and published the e-book Bakhtak (Incubus) a collection of 57 Farsi horror stories by authors living both in and outside Iran. The book was called for, launched and promoted via social media as part of an initiative to develop marginal literary genres, and was downloaded 5000 times worldwide, an “unprecedented” literary achievement according to BBC Persian.

Published as an e-book, Incubus, ( بختك-“Bakhtak“in Farsi) is a collection of fifty seven horror, at times blunt, stories written in Farsi by different Iranian writers, living inside and outside Iran. Read more: https://iranianstoday.com/anthology-of-short-story-by-iranian-diaspora/

The 2007 book, ‘On Marx’ (An Introduction to the Revolutionary Intellect of Karl ‎Marx), by American scholar Paula Allman provides a preliminary but enlightening ‎account of the ideas suggested by a prominent thinker. Read more: https://www.ibna.ir/en/tolidi/297710/on-marx-available-at-iranian-bookstores

July 7th marks the birthday of Bijan Elahi (1945-2010), a modernist, experimental poet who has posthumously acquired a position in Persian modern poetry that only a few canonical poets, like Nima Youshij (1897-1960), Ahmad Shamlou (1925-2000), and Forough Farakhozad (1934-1967), have previously achieved. Read more: https://www.theantonymmag.com/bijan-elahi-and-the-rise-of-sufi-experimental-poetry-in-persian/

To contact the author please send an email to: