The Stone Garden
Camera: Mehrnaz Mansouri
Review by Mehdi Ganjavi and Shahab Shafe
Amidst the arid land of Sirjan, a historic city at south of Iran, a surrealistic oasis known as Stone Garden ( baqi-sangi) catches the eyes of every visitor. It is the life-long project of a rural man, called Darvish Khan (1917-2007). Myriad unanswered rumors, attributed to the cause of the creation of such tree-metal-stone garden, are prompted by the silent curse of the old man. One story says the rockery was built in a response to a governmental oppression which resulted to the demise of Darvish Khan’s garden. According to another, an eccentric reverie, in which a stone descended from the sky and fall in front of him in the desert inspired him to do so. The garden was a “pista de ballo” for the enigmatic man where he used to dance with some semi-ritual spontaneous moves.

The evaluation of this artifact has been controversial. Some critics describe it as a personal obsession with stones which bears no artistic value, and some see it as one of the most avant-garde pieces of environmental art. Parviz Kimiavi, Iranian modern filmmaker, dramatized a movie based on this garden in 1976 in which Darvish Khan himself played.

After the death of the creator, his masterpiece became the eternal haven for his body (check the black gravestone in front of the trees). It seems to me that all the trees, and the garden as a whole, are praying to his absent dancing body. 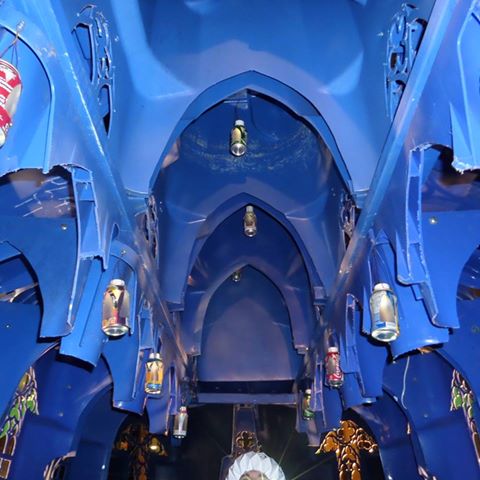